You Are Here: Project: Function of Legionella pneumophila phospholipases in vacuole and host egress 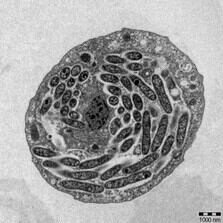 Exit is a principal step during infection allowing pathogen transmission and therefore is essential for continuation of disease or spread in the environment. But the mechanisms leading to ultimate release of the bacteria from the host are to a big extent not clear. Particularly bacterial phospholipases due to their membrane destructive capacity may support egress of Lpn. Lpn harbors a plenty of them and the subgroup of GDSL and PlaB enzymes due to their substrate specificity and high level activity, abundance at later time points of growth, impact on virulence, secreted or bacterial surface-associated nature and localization during host infection seem well suited to support bacterial egress.

In the here anticipated project, we will 1) establish methods for efficient Lpn egress quantification, such as a beta-lactamase-based or a metabolic reporter assay for sensing cytosolic release of bacteria combined with fluorescence readout detection. 2) We will study the i mportance of Lpn phospholipases and respective hyperactive versions for Lpn exit and their interplay with bacterial vacuole-protective factors by means of determining exit kinetics of defined Lpn mutants and mutants with protein variants. 3) We will investigate how Lpn phospholipases may support egress from the LCV and which lipids hydrolyzed are critical for the phenotypes observed. Further, we will apply artificial lipid bilayer assays to determine the phospholipase enzymatic potential for membrane disintegration and the possible effect of protective factors. 4) We will use an unbiased Lpn transposon insertion library screen for essential exit genes involving fluorescence-activated cell sorting . The mutants of interest will be further characterized respective grade and quality of exit defect (link aim 2), effect on LCV lipids (link aim 3), and for their behavior in different infection models. In summary, data obtained by the described experiments will help to characterize the egress process of Lpn in more detail.