You Are Here: Project: MTRAP mediated exit of Plasmodium from red blood cells and oocysts 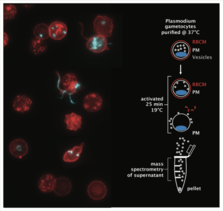 Malaria-causing parasites are transmitted to and from mosquitoes. Within the mosquito the sexual forms of Plasmodium need to exit from the infected red blood cells to form zygotes and in turn motile ookinetes that cross the midgut epithelium to generate oocysts. Within oocysts, sporozoites are formed which again need to exit to eventually reach and enter into salivary glands in order to be transmitted back to vertebrates. Hence, without exit from red blood cells or oocysts the life cycle is interrupted.

Several proteins have been identified as being essential for either exit from infected red blood cells or exit from oocysts but so far none has been shown to be important for both processes. Also, we currently have little mechanistic understanding of the function of the identified proteins as few protein-protein interactions have been established. We recently showed in the rodent model parasite Plasmodium berghei that a membrane spanning adhesion protein called MTRAP is important for gamete egress from the red blood cell. We also found a related protein called TRP1 to be essential for sporozoite egress from oocysts.

While TRP1 is only expressed in oocysts and sporozoites, we found MTRAP to be expressed in both gametes and sporozoites suggesting that it could also play a role in sporozoite biology. Both proteins contain thrombospondin repeats in their extracellular domain and a similar cytoplasmic tail. Here we want to further our knowledge about MTRAP function in gamete egress by generating parasite lines with point mutations and domain deletions in MTRAP as well as identifying interaction partners of MTRAP. In addition, we will investigate if the protein also plays a role in sporozoite exit from oocysts.