You Are Here: Project: Vesicle dynamics during the egress of malaria gametocytes from the red blood cell

Project: Vesicle dynamics during the egress of malaria gametocytes from the red blood cell 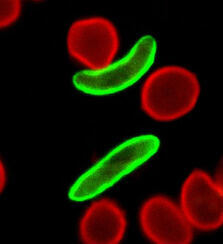 Malaria parasites are obligate intracellular pathogens that replicate in human red blood cells harbored by a parasitophorous vacuole. While the intracellular compartmentalization provides shelter to the parasite, it needs to exit from the red blood cell to continue life-cycle progression and ensure human-to-mosquito transmission. Two types of blood stages are able to lyse the enveloping red blood cell to mediate egress, the merozoites and the gametocytes.

Plasmodium falciparum, the causative agent of malaria tropica, exits the red blood cell via an inside-out mode during which the membrane of the parasitophorous vacuole ruptures prior to the red blood cell membrane. In both blood stages, membrane rupture is initiated by the exocytosis of specialized secretory vesicles upon perception of an egress trigger. The two stages, however, differ significantly in the temporal sequence of egress based on their intracellular conditions. While the merozoites exit rapidly from the red blood cell to ensure efficient dispersion, a slow egress provides activated gametocytes, which have been taken up with the mosquito´s blood meal, with enough time to transform into fertile gametes able to survive in the hostile midgut environment. Upon activation by external factors, gametocytes successively discharge two types of vesicles, the osmiophilic bodies needed for rupture of the parasitophorous vacuole membrane and recently identified vesicles, here termed g-exonemes, that are important for the perforation of the erythrocyte membrane. Several proteins of the osmiophilic bodies have previously been described, including Pfg377, MDV-1/Peg3, and GEST, while the protein composition of the g-exonemes harbouring the perforin PPLP2 remains to date unidentified.

Within the SPP 2225, it is our goal to understand the dynamics of these vesicles during egress of activated gametocytes from the red blood cell. On the one hand we aim at identifying the proteomes of the osmiophilic bodies and g-exonemes using BioID methods. The identified proteins will be compared to the ones of merozoite-specific m-exonemes and gametocyte membrane-associated proteins as analyzed by our SPP 2225 collaborators. Prospective candidates will subsequently be functionally characterized by reverse genetics. On the other hand, we aim at unveiling the protein complexes mediating tethering, docking and fusion of the vesicles in order to shed light on the regulated sequence of exocytosis during gametocyte egress. As a starting point, selected v-SNARE proteins will be functionally analyzed by reverse genetics and the v-SNARE interactome will subsequently be identified by BioID. We expect that data gained during this study will further our knowledge about the molecular machinery governing gametocyte egress from the red blood cell and help to identify novel targets for transmission-blocking interventions.