You Are Here: Project: Regulation and disassembly of the intravacuolar F-actin network during host cell egress by apicomplexan parasites

Project: Regulation and disassembly of the intravacuolar F-actin network during host cell egress by apicomplexan parasites 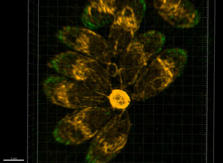 Apicomplexans such as Plasmodium spp. and Toxoplasma gondii are obligate intracellular parasites. During replication multiple daughter parasites are formed within a single mother (2 in case of T. gondii tachyzoites, and up to 32 in case of blood stage Plasmodium falciparum). Recent research highlighted the presence of an intravacuolar network, a tubular structure that connects parasites and allows material transfer, organellar recycling and coordination of synchronised replication in the case of Toxoplasma. An analogous network also emerges in P. falciparum, albeit with structural and possible functional differences, which we will elucidate during this project. This intravacuolar network is organised and built by filamentous actin (F‑actin), which breaks down prior to egress in a coordinated and rapid manner. While ablation of the network by modulation of F‑actin dynamics leads to loss of material exchange and parasite organisation within the PV, it does not directly inhibit parasite egress. Conversely, its stabilisation leads to a significant delay or block of host cell egress in both Toxoplasma and Plasmodium, with parasites remaining attached to each other. Time-lapse analysis of egressing Toxoplasma tachyzoites demonstrated a 2-step mechanism during egress. First, the intravacuolar network is rapidly disassembled, before parasites exit the host cell.

Within the SPP 2225, it is our goal to understand the dynamics, regulation, and function of this network during the exit of parasites from their host cell. Although significant differences exist between the egress of Toxoplasma and Plasmodium spp., the fundamental role of the F-actin-network appears to be conserved. Therefore, we chose a comparative approach to highlight similarities and differences regarding the regulation of this network, focusing on:

1) Analysis of F‑actin dynamics during parasite egress in response to known signalling cascades.