You Are Here: Project: The Function and Mechanism of cGMP Signaling During Egress and Reactivation of Toxoplasma Bradyzoites

Project: The Function and Mechanism of cGMP Signaling During Egress and Reactivation of Toxoplasma Bradyzoites 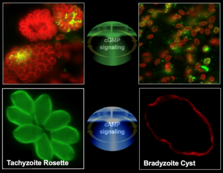 Toxoplasma gondii is an obligate intracellular parasite of several warm-blooded organisms including humans. Successful infection and transmission of T. gondii depends on its ability to switch between the fast-replicating tachyzoite (acute) and quiescent bradyzoite (chronic) stages. Acute infection is caused by periodic lytic cycles of tachyzoites, which among others is regulated by cyclic nucleotide signaling. In the context of this proposal, specifically, cGMP signaling controls the calcium-dependent gliding motility, which in turn drives the events of tachyzoite egress from dilapidated host cells and ensuing invasion into adjacent host cells. Unlike tachyzoites, nothing do we know about what governs the exit of intracellular bradyzoites, and how they switch back to the tachyzoite stage (recrudescence). This project aims to stage-specifically express a light-regulated guanylate cyclase to enlighten the role and mechanism of cGMP signaling in egress of encysted bradyzoites, as well as their switching to the tachyzoite stage. In further work we will study whether the effect of cGMP signaling in bradyzoites is mediated via calcium oscillation, and identify underlying effectors by phosphoproteomic analysis of optogenetically-modified strains. Not least, genetic knockout of selected signaling factors combined with egress or reactivation phenotyping of the eventual mutants under light and dark conditions will allow hierarchical dissection of cGMP signaling. The cumulative knowledge gained from our proposed work can be exploited for therapeutic intervention against chronic toxoplasmosis, which cannot be treated as yet.